Described as ‘a fascinating story of idealism, fantasy, and the dark side of the wilderness experience’, Into the Wild makes for perfect van life reading as we come out of lockdown.

You might not be venturing into the wilds of Alaska like our protagonist, Chris McCandless, but nonetheless, this book – or the movie, if you prefer – will ignite the yearning for adventure deep in your soul.

Into the Wild by Jon Krakauer is one of Hobo Gav’s favourite travel/adventure books so this review is written by him. We hope you enjoy it…

Into the Wild – a story about answering the call to adventure

Back on our Van Life page, we talk about how van life can be seen as a call to adventure. There is a need in our DNA to journey to and explore far-flung places.

Into the Wild is just that, and is based on the true story of Chris McCandless, a young man who gave up the ‘American Dream’, gave away all his money and wandered alone into the wilds of Alaska.

Chris was searching for something beyond what ‘normal’ life can give us, something raw, wild, natural, something essential that would give his life more meaning and make it all worthwhile.

Using the great mythologist Joseph Campbell’s now well-known phrase, Chris was answering ‘the call to adventure’. Destiny – or some would say stupidity – drew him onwards.

See what you make of the movie trailer…

A hero or a fool?

It is a necessary task along the The Hero’s Journey to answer the call and step into an unknown world. The way we’ve been living our lives no longer meets our needs.

But not everyone goes to such drastic lengths as McCandless did…

Immediately after graduating from university in the summer of 1990, Chris McCandless dropped out of sight. He changed his name to Alexander Supertramp, gave $24,000 to Oxfam, abandoned his car and invented a new life for himself – that of a wandering hobo.

The book gives us the back-story of what might have influenced such a drastic turn of events – the most likely cause being a difficult relationship with his father, whom Chris felt had betrayed his trust.

By April 1992 – a time of year when Alaska is still covered in snow – Chris followed his destiny and headed into the wild. The guy who’d given him a lift as far as he could go until the track ran out, thought he was unprepared and would soon retreat out and back onto the highway.

Indeed, most people whom McCandless told of his intentions thought the idea was crazy. He was ill-equipped, had just a bag of rice for food, and even though he had some trekking experience, he’d never encountered anything like Alaska would throw at him.

Whatever lay ahead of him, Chris McCandless seemed to have the faith – or folly – that he’d be able to handle it. His spirit of adventure is captured in a quote in a letter sent to a friend whilst on his travels…

“So many people live within unhappy circumstances and yet will not take the initiative to change their situation because they are conditioned to a life of security, conformity, and conservatism, all of which may appear to give one peace of mind, but in reality nothing is more damaging to the adventurous spirit within a man than a secure future. The very basic core of a man’s living spirit is his passion for adventure…”

And then, shortly afterwards, seemingly more determined than ever to follow his calling, he wrote this to other friends he’d met on his travels…

“Hey Guys! This is the last communication you will receive from me. I now walk out to live amongst the wild. Take care. It was great knowing you.”

The finality of that last sentence is palpable. It was almost as if he knew he wouldn’t ever be coming back.

At the same time McCandless was heading onto the Stampede Trail – April 1992 – our VW Cree was being coach-built!

I imagined that as it rolled out of the factory, all shiny and new on a sunny spring day, Chris was stumbling upon a rusty shell of a vehicle that would be his home for the next four months – a vintage ‘International Harvester’ bus from the 1940s…

Three of these buses were hauled behind a Caterpillar in the early 60s to house road workers. However, after 50 miles of road was built, the project came to an end when seasonal floods made further construction impossible.

Consequently, two buses were returned to base, but this one remained in situ for years afterwards as a shelter for wandering hobos like McCandless.

It was outfitted with a bunk bed and a barrel stove, and previous visitors had left stocks of matches and other essentials. Chris was elated to have found it and wrote in his journal, ‘Magic Bus Day’.

From here, Alexander Supertramp spent the summer, foraging for wild food, shooting game and much larger prey – including a moose which the flies mostly devoured – the killing of which badly affected his emotional state.

With a lack of human contact surely starting to affect him as the weeks turned into months, having to kill innocent creatures didn’t sit comfortably at all, especially after he failed miserably to store the meat before the maggots ate it to the bone. What a waste.

After that, things in the wilds of Alaska soon became a matter of survival.

Author Jon Krakauer talks in the book of his own brushes with survival on various mountain climbing expeditions. I believe Krakauer certainly felt an affinity with McCandless’ unquenchable thirst for the ultimate high of the wilderness experience. They are kindred spirits, which no doubt prompted Krakauer to first write an article for Outside magazine before turning it into the book.

“As a young man, I was unlike McCandless in many important regards; most notably, I possessed neither his intellect nor his lofty ideals. But I believe we were similarly affected by the skewed relationships we had with our fathers. And I suspect we had a similar intensity, a similar heedlessness, a similar agitation of the soul.”

Into the Wild – a heroic tragedy

Hobo Trudi asked me why I’d used the word ‘hero’ to describe McCandless’ vagabond journeys. To me, the word is justifiably used if we think of it in terms of courage. The courage – and bravery – to leave the known world behind and head into uncertain territory, not knowing if you’ll ever make it out alive, is what begins The Hero’s Journey.

Most of us stay with what we know, cocooned in our so-called comfort zones.

I won’t spoil the ending if you’ve not read the book or seen the film, suffice to say that this story will stir something deep inside that’s been buried for years. Only the bravest among us could do what Chris McCandless did back in the summer of 1992.

In his own words, scrawled in full capitals on a sheet of plywood inside the bus, McCandless announces his triumphant arrival into the wild…

“TWO YEARS HE WALKS THE EARTH. NO PHONE, NO POOL, NO PETS, NO CIGARETTES. THE ULTIMATE FREEDOM. AN EXTREMIST. AN AESTHETIC VOYAGER WHOSE HOME IS THE ROAD…AND NOW AFTER TWO RAMBLING YEARS COMES THE FINAL AND GREATEST ADVENTURE, THE CLIMACTIC BATTLE TO KILL THE FALSE BEING WITHIN AND VICTORIOUSLY CONCLUDE THE SPIRITUAL PILGRIMAGE…NO LONGER TO BE POISONED BY CIVILIZATION HE FLEES, AND WALKS UPON THE LAND TO BECOME LOST IN THE WILD.“

Into the Wild is without doubt one of my favourite travel-cum-adventure books and is perfect for those lazy days in your van when you just want to chill and read.

Although most of us will never have the guts (or the foolhardiness) to even attempt anything like what McCandless did, the magic of the story will leave a deep impression on your soul and a yearning to meet the need for adventure.

Get your copy of the book here…

Or if you prefer to watch the movie…

Remember to check out our other van life and travel book reviews, including what we think to be the best van life book ever!

As Amazon affiliates, we’ll receive a small commission if you purchase the book or movie from the links on this page. Our full Affiliate Product Disclosure Document can be read here.

No copyright infringement is intended by the use of any media on this page. If you see an issue please contact us and we’ll put it right asap.

save yourself time! JUST TYPE IN A WORD OR TWO TO HELP YOU FIND WHAT YOU’RE LOOKING FOR

OUR JUNE NEWSLETTER IS OUT NOW – with exclusive content and the best van life stories from the UK and overseas – only available to subscribers.

Always good to hear that this old girl is in good condition for her age. An MOT pass is reassuring! #motorhomehobos #wheresmyofficenow #motorhome

Lovely day in #Felixstowe for a study day in the "mobile office". #wheresmyofficenow #motorhomehobos #motorhome 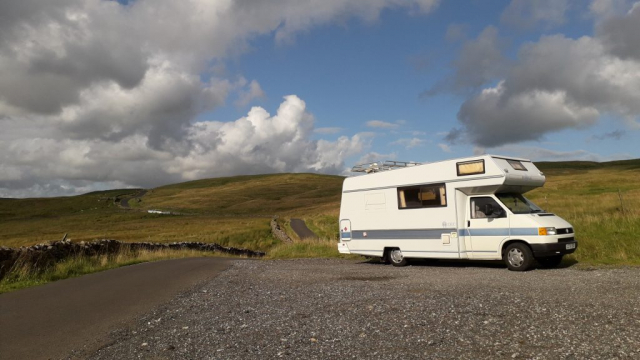 How to Find Your Perfect Motorhome